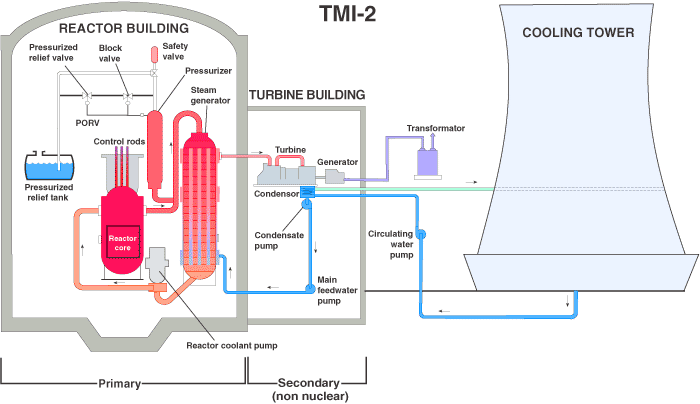 Following a combination of technical, design and human errors, the nuclear fuel was left exposed for a period and the fuel began to melt. The situation was successfully recovered, however. Over the following 3 days, the operators released a small amount of radioactive steam to lower the pressure in the reactor, but nowhere near enough to cause illness, injury or death to workers or the general public.

All the fuel and radioactive material was safely removed by 1990 and is now in secure storage offsite. TMI-2 is now in long-term, monitored storage until the operating license for the TMI-1 plant expires, at which time both units will be decommissioned.

Consequences of the accident: Public fear and distrust increased, nuclear regulations and oversight became broader and more robust, and management of the plants was scrutinized more carefully. Careful analysis of the accident’s events identified problems and led to permanent and sweeping changes in how nuclear plants are regulated – which, in turn, has reduced the risk to public health and safety.

The critical role of human performance in plant safety was recognised and led to revamping operator training and staffing requirements.

Accident details: A short summary of the accident at Unit 2 is available at this link from the US Nuclear Regulatory Commission (NRC). The summary includes an animation of the sequence of events associated with the accident at TMI-2.

There is also a fascinating and very entertaining assessment of the TMI accident at this link. The website at http://www.hiroshimasyndrome.com is highly recommended.