There is growing global public support for action on Climate Change. Marches held in December 2015 throughout Ireland and the developed world called for urgent and meaningful agreements in the Conference of the Parties (COP21) being held in Paris. The people clearly want the climate problem addressed.

In 2016, Ireland’s energy policy for the period to 2030 was published and our citizens had an input into this, too. See the Background section below for details of that process.

All this is good news, as effective climate change action – or even an energy policy – cannot have a realistic chance of success without widespread public acceptance of the need for sustained change in how we use energy and in the type of energy that we use. So far, so good.

But selecting the optimum mix of energy types and energy end uses is technically challenging. It requires detailed analysis of all the options by a qualified and experienced team who can determine how to lower emissions in the most affordable manner while keeping supply reliable and secure. This should be conducted having appropriate regard for public opinion.

This is unlikely to happen in the case of nuclear, however, and this could be a serious error on behalf of the policy-makers. After all, nuclear power is acknowledged as one of the lowest available emitters of greenhouse gases and can also produce electricity at very competitive prices. That is why new nuclear power is currently being built or planned in Britain, France, Finland, Bulgaria, USA, China, India, South Korea and elsewhere.

Suspicions that nuclear is not being considered impartially in Ireland are supported when you consider:

As some Irish political parties are also anti-nuclear by official policy, it is unlikely that nuclear will be impartially considered by any Government Department.

Whether nuclear power has a future in Ireland in the next 20 years could be considered by an independent group of energy experts in a relatively short time-frame. If they conclude that Nuclear is not likely to be an option for Ireland on technical grounds, then let that be known and we can all plan for a medium-term future without it.

If Nuclear is technically a good solution for Ireland but we decide to reject it on the grounds of educated public opinion, we can then also plan for a medium-term future without it. A 2015 on-line poll suggests that there are grounds for believing that a majority of Irish people would welcome a debate on Nuclear here. Here’s the result as of 1 December 2015: 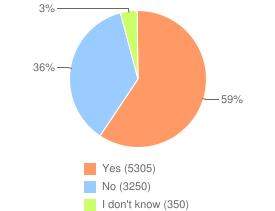 If we decide, following a rational process, to forego nuclear power in favour of other low carbon technologies we will then be better prepared to accept the economic and environmental consequences of that decision. The cost of failure is so high – from both an economic and an environmental perspective – that we owe it to ourselves and our dependents to rationally investigate all the potential solutions to help us solve this most difficult of problems.

The sooner we take up this challenge in earnest, the earlier we will make real progress towards creating a sustainable future for all.

Energy Policy Background: The Green Paper on Energy Policy in Ireland (launched in May 2014), began public consultation on our energy policy for the medium to long-term. The Policy Paper sparked a lot of interest with the public and 1,241 written submissions were made. Here’s a summary of the Green Paper consultation responses – pdf 806 kB.

The final Energy Policy White Paper was published in December 2015 and identifies actions that will reduce Ireland’s energy-related carbon emissions by between 80% and 95% (compared to 1990 levels) by 2050. The focus was on renewables, community schemes, energy storage, energy efficiency, biogas and transport. Consideration of nuclear was deferred to a series of National Energy Forums to be held in 2016.

The 3 key pillars of energy policy are to focus on security, sustainability and competitiveness. While energy plays an important role in driving economic activity, we must reduce our carbon foot print and dependency on fossils fuel and take advantage of energy efficiency initiatives.