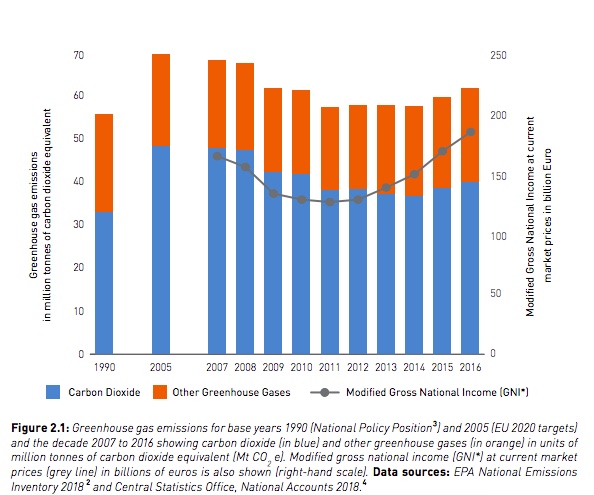 Ireland has had no shortage of recent initiatives aimed at delivering a sustainable, reliable and affordable energy system. These include the Energy Green Paper, Energy White Paper, National Mitigation Plan, National Renewable Energy Action Plan, Climate Action Act and National Dialogue on Climate Action – among others.

The stated main goals of these initiatives is to reduce emissions of greenhouse gases while increasing our use of renewable energy.

Behind the fanfare were some who appeared to believe – without much evidence -that they would actually reduce our emissions. Many more of us – nerds, if you like, who conducted or read the studies – knew that the plans sounded great to those that get up early and trust our leaders to do the right thing, but had no real prospect of reducing our emissions sufficiently.

And so it came to pass. Although we are using more renewables, emissions of greenhouse gases continue to rise in Ireland. The EPA confirms that we are moving further away from our target trajectory with every passing year, while the Climate Change Advisory Council says that “Ireland is completely off course in terms of achieving its 2020 and 2030 emissions reduction targets“. 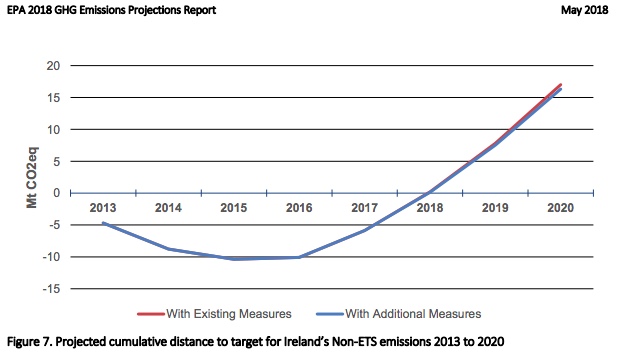 When taken beside the fact that energy prices here continue to be amongst the highest in the EU, our Climate Action problem is nowhere near solved.

The latest initiative is for a Dáil Committee to take up the recommendations of the Citizens’ Assembly who considered ‘How the State can make Ireland a Leader in Tackling Climate Change‘. This process is similar to that which resulted in the recent Referendum on the 8th Amendment to the Constitution, a process that was seen by many as being a political success.

Given that the 2 topics are so fundamentally different – tackling Climate Change requires implementing practical solutions while the 8th Amendment raised social, political and religious questions – it is not at all clear that the new Dáil Committee will have more success than we had with the previous initiatives.

The committee will begin by looking at the final report of the Citizens’ Assembly. Sensibly, it will also check whether anything is missing from the report before looking at it in detail.

The Citizens’ Assembly report is an excellent summary of all the activities up to and including the two weekends of deliberation into the matter. It appears to contain all the relevant submissions from the public, experts and various interested parties and the background information, processes, presentations and final recommendations; and has been rightly praised for the level of professionalism that went into its production.

And yet it is missing something. Something important. Something that is perhaps camouflaged by all the data but is fundamental to judging the ultimate effectiveness of the Assembly’s efforts, which is the most important thing of all. That is; will it work?

Will the recommendations, if implemented, make Ireland a leader in tackling Climate Change? Or will they simply lead to a repeat of the often-expensive failures of the previous initiatives?

In fairness to the Citizens’ Assembly, it was not part of their remit to assess whether the recommendations will achieve the aim of leadership in tackling Climate Change. But who, then, will analyse the recommendations for effectiveness? The Dáil Committee? That remains to be seen.

Taking effective Climate Action will require complex societal changes as well as new technology. But at least we know what it is we are trying to achieve, as we can figure out the probable maximum emissions the atmosphere can handle so that average global temperatures do not exceed 2 degrees, the limit agreed under the Paris climate commitments.

Simple mathematics shows that our entire carbon budget will be spent by 2030 at that rate, after which we will need to capture and store all our emissions in order to keep to the budget.

Carbon Storage technology in still in its infancy and its final effectiveness and cost remains to be seen. But we know that it will almost certainly be required in Ireland within 15 years.

Our previous energy initiatives focussed on replacing fossil fuels with renewables – including wind, solar, wave, tidal, hydro and geothermal. Although we have spent well over 4,000 million euros to date on wind turbines alone, and intend to ramp up this spending, our emissions are increasing instead of decreasing. 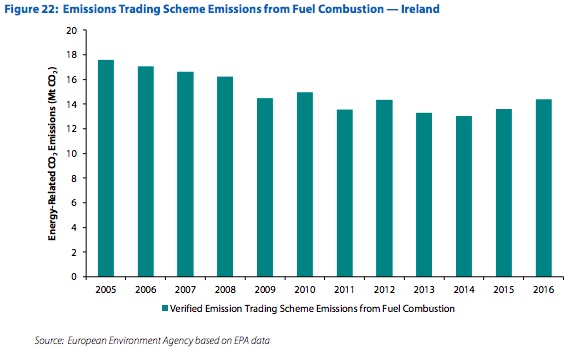 Pretty much the same thing is happening in Germany, where they have spent an estimated 125 billion euros on renewables from 2000 to 2015 – yet their emissions have stagnated (see below). They, also, are expected to miss their emissions targets from the energy sector. 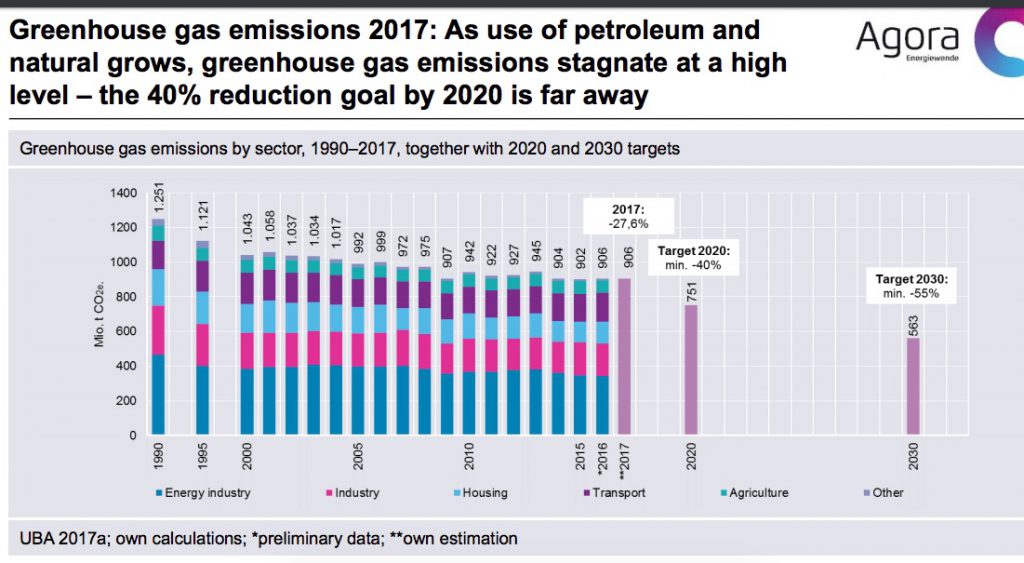 That’s not to say that the problem cannot be solved. Fortunately, there are examples of countries who have managed to quickly decarbonise their power systems at reasonable cost and with minimal disruption, and these show us how it can be done. France, for example, replaced almost all their fossil fuels with nuclear energy in the decade following the 1973 oil crisis and now have the cleanest and cheapest electricity in Western Europe.

Nuclear energy is the fastest means of adding low carbon power over a decade, as can be seen from the graph below: 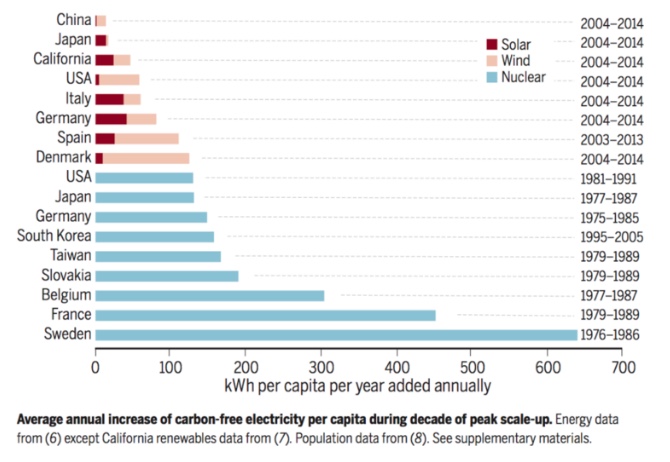 Nuclear technology has evolved since then and there are now reactors that are small enough for Ireland, are cheaper than any other reliable low-emissions electricity, can use existing nuclear waste as their fuel while the resulting waste decays much, much faster than the original waste, are physically incapable of melting down and can be built in 3 to 4 years. These plants can produce safe, clean, reliable and affordable energy to help us meet our climate change targets.

The proven climate change solution that is nuclear energy was not part of the discussions at the Citizens’ Assembly. Whether this was due to a shortage of time or short-sightedness on their part we will probably never know. And Nuclear energy will, most likely, also not be part of the Dáil Committee’s deliberations. Thus, it is quite clear that the mistakes of the past initiatives are about to be repeated to further great fanfare and at great expense.

While our leaders express the need for ‘transformative societal change’ in order to lead in tackling climate change, the fact of the matter is that we will probably fail to even meet our targets, never mind lead in tackling climate change, if we are not even prepared to have an open discussion of whether Nuclear energy and Carbon Capture will be needed to assist us in our efforts.

It is worth noting the extract below, where the IPCC says we will probably need both Nuclear and Carbon Capture (CCS) as well as Renewables.

If we consciously decide against Nuclear and / or CCS, then we need to be clear about which practical alternatives are to be pursued instead.

The time for hand-waving and lofty ideology is long gone. What is needed now is a plan that can be shown to finally tackle climate change – possibly even lead in it – by being effective at reducing emissions in an affordable manner.

What could be a more potent sign of our intent to get serious about climate change than to examine our national phobia about nuclear energy, the proven most effective means of decarbonising energy?

Calls for a rational discussion of nuclear energy have come in the past decade from 2 Ministers for Energy, ESB, IBEC, ICTU, Forfás and others including Engineers Ireland. Such calls may be resisted by the fossil fuel and renewable industries to delay their inevitable loss of profits when nuclear energy arrives here.

But they will be supported by anyone who puts genuine climate action ahead of ideology and who is interested in ensuring a reliable supply of clean, safe and affordable energy with minimum disruption to our natural environment and its relatively unspoilt landscapes.

The question is: does the Dáil Committee have the courage to broach the topic and the strength to see it through to a practicable conclusion. Or will it continue along the well-trodden, popular but ill-conceived path to failure?

90 years ago, shortly after Ireland achieved independence, our political leaders had the vision to agree the Shannon Scheme which began the process of, quite literally, bringing Ireland from the darkness into the light. Our need now, while different, is perhaps even greater as we try to maintain a global atmosphere compatible with sustaining human life as we know it.

We will soon see whether the politicians of present-day Ireland have the vision to enable Ireland to play its part in tackling climate change – and, yes, perhaps even leading in that role.

Denis Duff is a Chartered Engineer with a lifetime's experience in most aspects of electricity production - power station design, construction, commissioning, operation, maintenance and decommissioning - with experience also of power purchase contracts and management development. He has worked with Wind, Hydro, Oil, Gas and Peat in Ireland, Asia and Africa. View all posts by Administrator

One thought on “Climate Action – decision time for Ireland”