All of the earth’s natural resources are limited, but Uranium is not limited to a significant extent. There is plenty of fuel to supply for life any nuclear plants built in the next decades.

The Nuclear Energy Agency of the Organisation for Economic Cooperation and Development (OECD) published (June 2006) the latest edition of its “Red Book“, a regular publication which has reported on Uranium Resources, Production and Demand over the past decades.

The International Atomic Energy Agency (IAEA) of the United Nations also participates in the gathering of the data contained. The document states that the amount of uranium available today is 4.7 million tonnes, which is enough to fuel the present fleet of reactors for 85 years. However, it goes on to state that, based on geological evidence, some 35 million tonnes are available for exploitation.

By 2025 the world nuclear energy capacity is expected to grow between 22% and 44% and the OECD believes the currently identified resources are adequate to meet this expansion.

In the longer term, continuing advances in nuclear technology will allow substantially better utilisation of these resources: reactors will be capable of extracting some 50 to 60 times as much energy from the uranium as present day reactors. Thus, there is sufficient uranium available to power nuclear reactors for the foreseeable future. 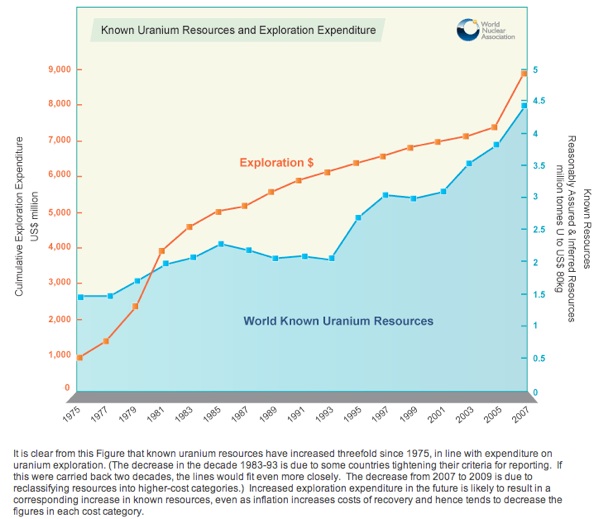 See also this excellent article from Dr. Tom O’Flaherty on the topic. In an article published in the Engineers Ireland Journal in June 2011, Tom argues that there is more than enough nuclear fuel to support all planned and current nuclear fission reactors for many decades to come.