Introduction: Nuclear power is actually the safest form of large-scale power generation, although a many people are frightened by it. They fear the possible impact on their health of living near a nuclear plant or of the consequences of a serious accident at the plant. However, many experts and scientists, including doctors, medical physicists and radiation experts, correctly assure us that excessive fears are not justified and may not even be helpful.

Much of the fear is “fear of the unknown” but can also be heightened by inaccurate reporting or by “scare-mongering” by various sources, for whatever reason.

To help people reach an informed opinion on the matter, we present below a range of articles and reports concerning the health implications of nuclear power. While every form of power generation has its dangers, the important thing is to manage the dangers, learn from mistakes and keep the risks to a minimum.

About radiation: Radiation can be frightening and confusing, particularly when it is not well understood. If you want to improve your understanding of radiation, where it comes from, how useful or harmful it can be, and how to know what is dangerous and what is not, then please check out this powerpoint presentation (287kB) on Radiation Dose from the US Department of Energy. It is written in a way that is easily understood by the general public but contains lots of useful information for everyone.

Radioactivity arises naturally from the decay of particular forms of some elements, called isotopes. Some isotopes are radioactive, most are not, though here the focus is on the former. There are three kinds of radiation to consider: alpha, beta and gamma. A fourth kind, neutron radiation, generally only occurs inside a nuclear reactor.

All of these kinds of radiation are, at low levels, naturally part of our environment, where we are all naturally exposed to them at low levels. Any or all of them may be present in any classification of radioactive waste.

An Irish medical opinion: Senator John Crown writes in the Sunday Independent that “our judgement was distorted by Chernobyl tales”. He goes on to say that “We need to discuss nuclear power as a serious option. So let’s do it openly”.  John Crown is a consultant oncologist.

Is radiation ever “good”? There is a widespread belief that all levels of ionizing radiation are dangerous. Some Radiation Hormesis studies show there is a high threshold of danger, and that low dose radiation might be safe and beneficial to life. These studies are inconclusive, however.

Childhood leukaemia not linked to nuclear plants: An extended in-depth study by COMARE has found no significant evidence of an increased risk of childhood leukaemia for children living close to the UK’s nuclear power plants over the period 1969-2004. COMARE is the independent Committee on Medical Aspects of Radiation in the Environment, and their report, published on 9 May 2011, considers additional factors not addressed in previous COMARE reports which the organisation says may account for differences in leukaemia risks in studies from other countries.

Those reports, covering the period 1969-1993, found no evidence that living within 25 km of a nuclear generating site in Britain was associated with an increased risk of childhood cancer. However, prompted in part by the 2007 German study Kinderkrebs in der Umgebung von Kernkraftwerken (KiKK), in 2009 the UK’s Department of Health asked COMARE to conduct a further review in addition to its previous studies. Read more..

According to the newly released report, the pathology of cases of leukaemia and non-Hodgkins lymphoma occurring in children living within 10 km of a UK nuclear power plant did not appear to differ from a larger group of control patients. The risk estimate for childhood leukaemia associated with proximity to a nuclear power plant is “extremely small, if not zero”, the study concludes.

Swiss study shows no nuclear link to cancer: A nationwide study involving more than 1.3 million children in Switzerland has concluded that there is no evidence of an increased risk of cancer for children born near nuclear power plants.

Radiation comparison chart: This is an interesting chart that compares radiation exposure from different sources.

This next chart compares radiation in the oceans from 3 different sources: nuclear weapons testing, nuclear accidents and naturally.

Fear of radiation: David Spiegelhalter, Professor of the Public Understanding of Risk at Cambridge University, explains in a BBC article why we fear radiation as we do, and offers some interesting facts which suggest that our fears may be exaggerated or, at least, unnecessary.

Health risks of Fukushima: Wade Allison, retired Professor of Physics and author of Radiation and Reason – The Impact of Science on a Culture of Fear, put the effects of Fukushima into scientific perspective in an interview on RTE Radio’s Morning Ireland.

Fukushima Radiation Comparison: This chart shows how Fukushima and Tokyo residents area received maximum doses no higher than those occurring naturally and safely in many populated parts of the world, even in the week following the accident. The orange line tracks the dose received by people in the area and plots how that compares it to other cities and activities. For comparison, the average annual exposure to people living in Ireland is around 4 mSv/year. 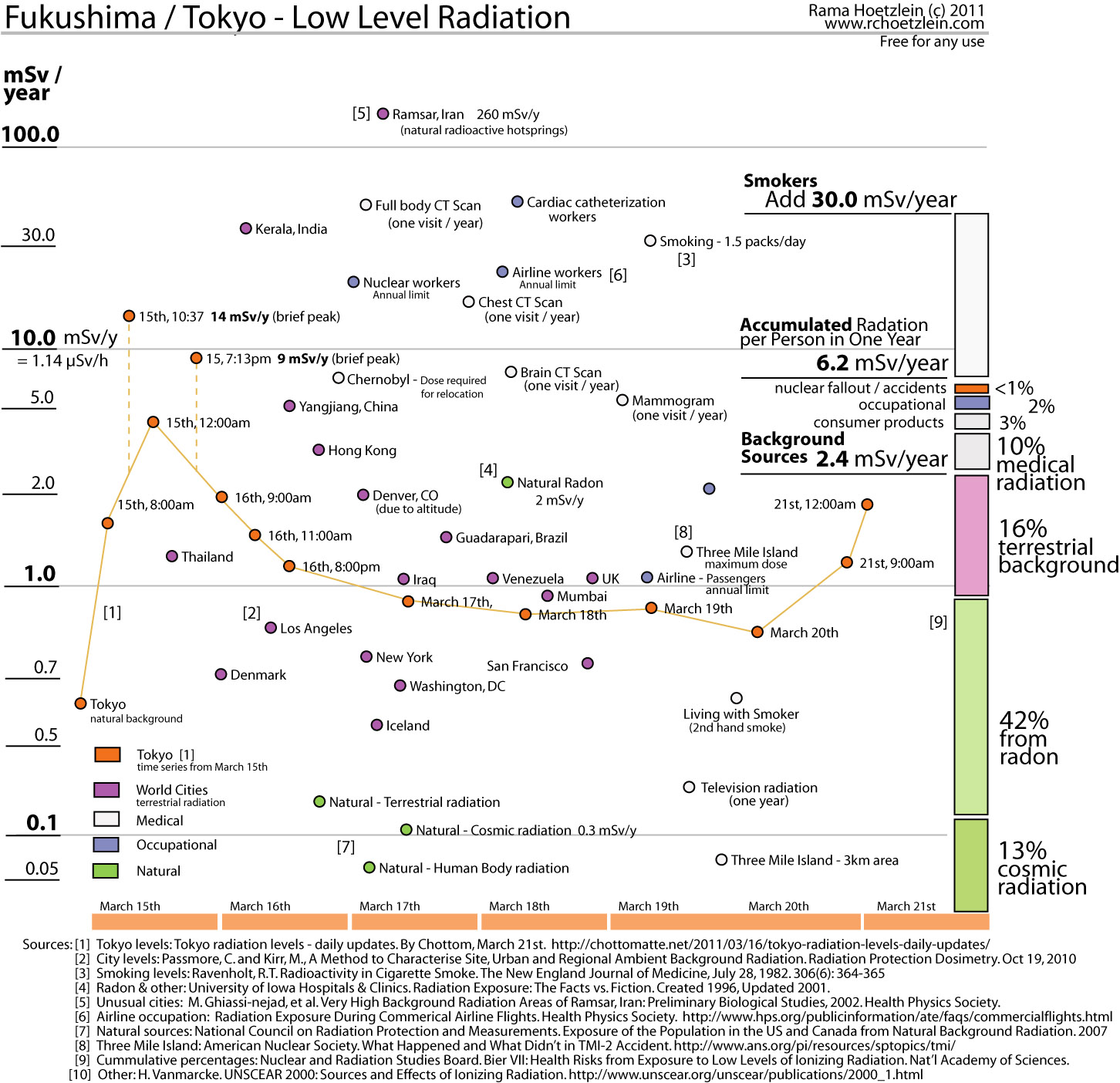 History of nuclear power: Some people find this article by James Chater of use in understanding how nuclear power developed and continues to develop. Note, however, that the article fails to mention Ernest TS Walton (1903-1995), the first Irish person to win a Nobel prize for science. Walton was awarded the Nobel Prize in Physics in 1951, jointly with J.D. Cockroft, for ‘splitting the atom’.