Ireland’s emissions reduction targets have changed over the years but our record in meeting these targets is appalling. Here’s a quick overview of our performance against the increasingly challenging targets. Note that ’emissions’ means emissions from a host of greenhouse gases but these are reported as carbon dioxide (CO2) equivalents for simplicity.

KYOTO Protocol: This was an international emissions reduction agreement that actually allowed Ireland to increase our emissions. Under Kyoto, our average emissions between 2008 and 2012 had to be no more than 13% higher than those in 1990.

Progress on meeting Kyoto: Our emissions peaked in 2005, when we were emitting over 70 million tons – well over our average allowance of 63.4 million tons. We had commenced buying Carbon Credits to offset the expected penalties by the time our Celtic Tiger economy collapsed and the great recession hit Ireland in 2007.

The reduced energy use caused by the recession, along with an increase in efficiency of our power generating plant as well as an increase in the use of renewables, all helped Ireland to meet our commitments under Kyoto. Our average emissions between 2008 and 2012 were 62.2 million tons.

The remaining, ‘non-ETS’ sectors have many EU-wide targets including, by 2020, to achieve a 20% reduction in emissions from 2005 levels, a 20% reduction in energy use and 20% of total energy to come from renewables. Ireland’s commitment is to reduce our emissions by 20% by 2020 but we only need to achieve 16% of our energy use to be from renewables. In order to achieve the 16% target, the Government has set a 10% renewable transport target, a 12% renewable heat target and a 40% renewable electricity target. Of electricity, 37% is to come from wind energy.

Progress on meeting the EU Directive: The graph here shows the progress to the end of 2014, and shows we have a lot done but much more to do. 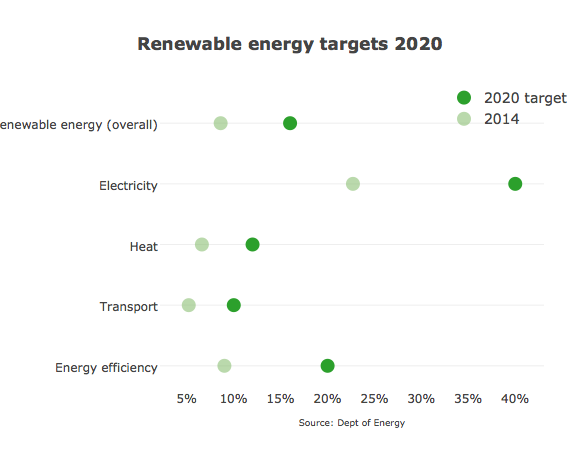 We are still on track to meet our renewable electricity target, having increased wind turbine capacity on the island of Ireland from 145 MW at the end of 2002 to 2,825 MW at the end of 2014. Ireland got over 22% of its electricity from wind in 2014. However, EirGrid say that our target wind penetration of 37% is “unprecedented and presents significant challenges for the realtime operation of the power system“. 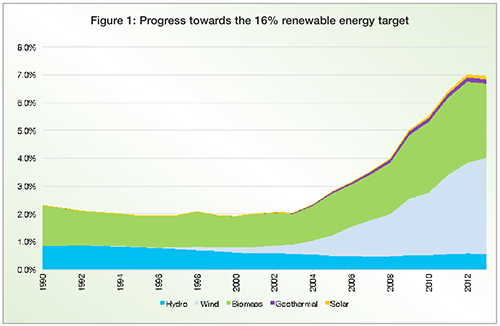 Read an excellent analysis, including this chart, from Energy Ireland for more detail.

We are not doing so well on emissions reductions, even though the target is compared to 2005 which represented the very peak of our emissions during the Celtic Tiger years and, so, should be relatively easier to meet.

The latest projection from the Environmental Protection Agency (EPA) is that Ireland will exceed our 2020 emissions target by up to 4 million tonnes at a cost of some €100 million – even if we fully implement everything we currently plan to do and despite our excellent renewable resources. This is called ‘With Measures’ (WM) and is shown in the blue curve in the graph below.

The red curve, above, shows that we could meet our 2020 emissions reduction target, but only if we fully implement all the schemes we are planning to introduce – called ‘With Additional Measures’ (WAM).

It would not be an exaggeration to say that we have serious challenges ahead if we are to meet these 2020 EU targets.

Beyond 2020: The EPA has predicted the pathway our emissions are likely to follow from 2013 to 2035 – the dashed lines below. The blue crosses show emissions targets  if Ireland must meet the EU average reduction agreed at the COP21 session in Paris in December 2015. It is clear from the chart that Ireland has to radically rethink our emissions pathway if we are to have any chance of meeting those commitments.

The above chart also shows what our 2050 emissions would be if we reduced them by 80%. Note, however, that COP21 has indicated that any emissions would need to be counteracted by some form of carbon absorption, including forestry, to result in a carbon neutral situation by 2050.

In summary, our performance has been poor to date in meeting our environmental targets. As these targets get progressively more difficult to reach, Ireland will need to take radical steps if we are to have any chance of meeting them. We should begin now to consider which steps to take in achieving these targets, including: